Thomas Baumgärtel (born in 1960), known as the "Banana Sprayer", is now a respected artist in whose artworks the yellow fruit plays a leading role.

Since 1986, he has been marking the most interesting locations worldwide - from New York to Beijing - with his banana. It has become the logo of the art scene and can be found on the portal of almost all galleries and museums of modern art worldwide. For Baumgärtel, the banana symbolises the freedom of art, which also consists of being able to have subversive fun by establishing a banal graffito as an artistic logo in public space.

Thomas Baumgärtel's works, however, are not just fun and provocation - the well-known artist also deals with current political issues, which he critically relates to his unmistakable distinctive logo. Without inhibitions, he depicts former U.S. President Donald Trump monkey-like with a banana in his mouth and in front of the American flag. The image, created in 2016, is already part of a private collection and was published online by Baumgärtel on Twitter for self-promotion. But the image was taken down by Twitter. The artist then complained about the censorship and said: "This is going too far, if this is really happening freedom of speech is over. It gives me the creeps." - And this, precisely considering the fact that the banana symbolises freedom of art for him. 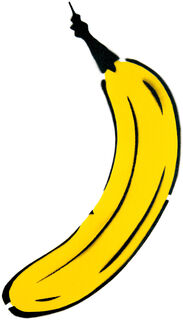 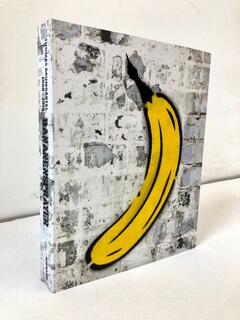