Umberto Boccioni (1882-1918), together with Tommaso Marinetti, is considered the main representative of Italian Futurism. In February 1910, he published the "Manifesto of Futurist Painting", in which he urged artists to break away from outdated and traditional norms. They should dedicate themselves to new art that corresponded to mechanisation and the Futurist future. Posthumously, Boccioni's works were exhibited at documenta I-III.

Boccioni's works are characterised by a dramatically tense division of the surfaces. Following the scientific principle of light, he believed that not only a moving but also a stationary body can create an equally dynamic effect - since basically everything is subject to the dynamics of the universe.

A milestone of Modern Art became the sculpture "Forme Uniche della Continuitae Nello Spazio" (eng. "Unique Forms of Continuity in Space") which is one of the major works in the collection at MoMA, New York. Boccioni's sculpture is also depicted on today's Italian 20 cent piece. 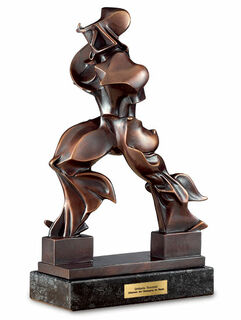