Rudolf Hausner is considered the most outstanding representative of the Viennese School of Fantastic Realism. In the 1950s, he became famous by starting to depict himself in his works through the leitmotif figure of "Adam": "Looking into my face, I found the world in it."

Rudolf Hausner's oeuvre is unique. All attempts to classify it in the usual categories of art history are bound to fail. Years ago, Wieland Schmied declared Rudolf Hausner to be the only psychoanalytical painter because reality and subconscious are of equal value in his work. The artist created the art figure of Adam after his own spitting image. The reason was that he knew no one better than himself and was, therefore, able to convey himself more profoundly. "Painting has taught me everything I know about the world and me. I am painting myself back to the causes, to my beginnings." This is how Rudolf Hausner described his independent contribution to international surrealism.

With this leitmotif, the artist developed a figure of the late twentieth century: the curious, enlightened, perplexed, but also sceptical contemporary who wants to get to the bottom of things. Because we as viewers identifying with him, his work points beyond the individual. Hausner has succeeded in creating the collective self-portrait of modern society.

In 1994, the City of Vienna honoured Rudolf Hausner, who held several professorships in Hamburg and Vienna, with a major retrospective. 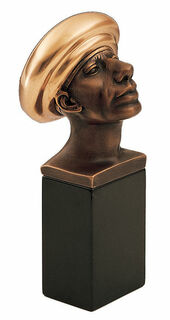