Hans-Peter Mader is creatively active in many artistic fields. After graduating from the University of Architecture and Building in Weimar, the studied architect concentrated on the artistic side of this discipline: initially as an assistant and seminar leader in the corresponding department of his university, where he ensured the basic artistic training of the following generation of students. However, at the same time, he continued his own studies: sculpture and ceramics at the Berlin Weißensee School of Art.

Mader has been a freelance ceramist and sculptor since 1989. Since then, he has also worked as a restorer and landscape designer – he seems to be attracted by whatever can be creatively shaped in some way. His focus remains on sculpture. In Mader's studio in Hohenfelden near Weimar in Germany, he creates sculptures that have already been presented in more than 150 national and international exhibitions. 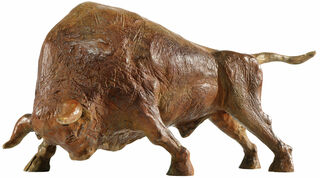