The sculptor is a highly renowned artist. His statues and portraits made of wood, stone and marble can be found in many collections and public spaces in Germany.

Serge Mangin became internationally known for his portrait busts (of Ernst Jünger, Luciano Pavarotti and Henry Miller, among others) and for the portrait trio of Helmut Kohl, Mikhail Gorbachev and George Bush Senior, which was erected as a unity monument in Berlin. In his studio in Munich, he also created and continues to create large-scale sculptures that, according to the artist, are inspired by the Greek "kuroi" – naked, standing statues that, for Mangin, epitomise the upright, free Greek citizen.

Mangin is a loner in the art scene. On the one hand, because he does not do exhibitions ("Even the word vernissage makes me sick."). On the other hand, because he sees his art as a "revolt of beauty" against the economic decadence of modern art: "My statues are always standing, they are free people, not consumers. Standing is always a kind of resistance for me."

The artist is also a draughtsman and watercolourist. He regards his works primarily as sketches in the search for ideas for sculptural motifs. However, the artist rightly emphasises that such preliminary works, precisely because they are created in a playful manner without "burdensome constraint", often have a convincing lightness. 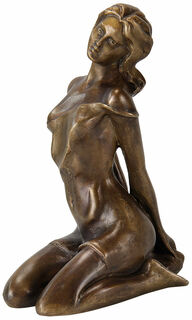