Praxiteles (c. 395 BC to c. 320 BC) was a Greek sculptor in Athens in the 4th century. He is praised by Pliny for his art of carving marble. However, his works in bronze are also known. Contrary to today's idea that the noble effect of marble is only caused by the white stone, Praxiteles had his sculptures painted by the painter Nikias. Through written records, in which his works are described, over fifty works are known to us today. These sculptures would be lost if the Romans had not made replicas.

Praxiteles' subjects were the gods of Olympus, whom he depicted as eternally youthful. In addition, portrait and funerary statues testify to the popularity of the Attic sculptor among his contemporaries.

His most famous statue and, according to Pliny, the most beautiful "in the whole world" is the "Aphrodite of Cnidus". Fifty large-scale Roman replicas of the beautiful woman undressing for her bath have been preserved. In addition to other images of Aphrodite, Praxiteles also created Eros statues, whose nudity gave rise to numerous scandalous anecdotes. One of his most famous statues of youth is the "Apollo Sauroktonos", which has been preserved in twenty Roman replicas. The most successful of these can be admired in the Louvre in Paris and the Vatican.

The sculptor always succeeded in lending grace to his statues by means of a beautifully curved contour. Especially in his images of the gods, he attached more importance to a differentiated depiction of the soul's feelings than to the reproduction of the sublime character typical of the time, thus giving them a human appearance. 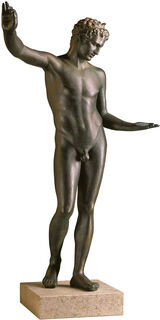