Joachim Röderer was born in Tuttlingen, Germany and studied art between 1981 and 1989 in Cologne and Madison/USA under Fred Meister and Paulette Werger. Since 1990, he has been working as a freelance artist. Joachim Röderer is a metal sculptor, and his preferred material is corten steel, which is particularly weatherproof and corrosion-resistant.

Röderer's art deals with signs and symbols and represents forms that could be taken from molecular biology. Typical of this is the x-like shape of the X chromosome, which is based on the fact that two sister chromosomes are still attached at one point during cell division. According to their molecular-biological shape, which is only visible under the microscope, Röderer developed three-dimensional steel sculptures in millionfold magnification. But other forms also appear in Röderer's oeuvre. An art expert describes Röderer's work as follows: "Joachim Röderer consistently works on sculptures that allow or evoke unusual perspectives on supposedly familiar things. In the example of chromosomes, this is the gigantic enlargement and reification of thoroughly enigmatic formations that are not visible in the normal world and yet exist." 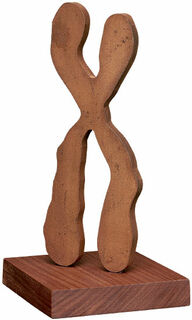