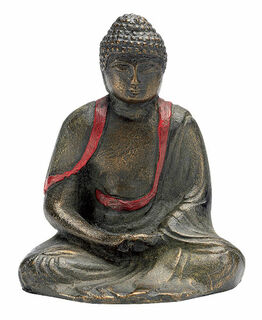 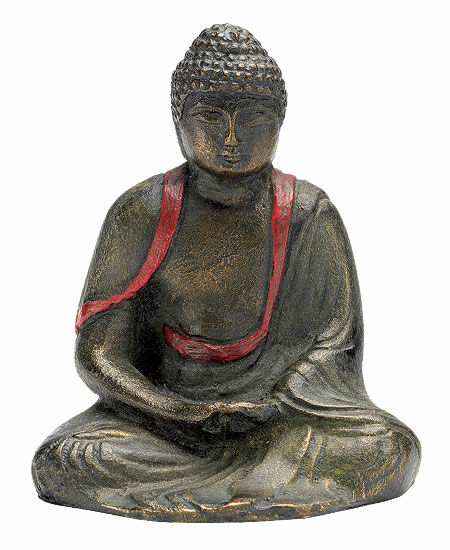 Amida is a shelter-giving, merciful and kind heavenly comforter. Those who trust in his mercy are reborn in his "Paradise of the Pure Land" and attain final liberation there.
Japan 13th century. Original in a private collection.

The art of Japan received its significant impulses from China, through the acquisition of Chinese culture and writing, the introduction of Buddhism, but also from Korea. The initial imitation was followed by the development of specifically Japanese forms and techniques in all areas of artistic creation. Different styles emerged as a result of conjunction with the religions of Buddhism, Zen and Shinto.

Japanese early history begins in the 7th millennium B.C. Pottery finds from this period contain cord markings that decorated the surfaces. Besides, stylised clay figures and masks have been also discovered from this period.

The Yayoi period lasted from the 3rd century B.C. until the 3rd century A.D. and took its name from the site of the discovery of bronze mirrors, bronze weapons and bronze bells with geometric and figural ornamentation.

Asuka and Hukaho Period (552 – 710)
With the official acceptance of Buddhism, the Chinese and Korean influence on Japanese art increased. However, the Shinto architecture preserved the prehistoric building styles in the shrines and wooden pile dwelling. The Buddhist sculptures of that time were strongly influenced by Korea and China.

Nara Period (710 – 794)
The art of this period that was achieved with a great deal of effort continued to follow Chinese models. Only the ground plan and about 200 sculptures have been preserved from the imperial palace. The enormous, 16-meter-high bronze casting of the "Great Buddha" of Todaiji is impressive. New materials, dry lacquer and clay made it possible to depict both monumental and dramatically moving figures. Later, the Chinese influence waned; the sculptures became blocky, the garments had wave-like folds.

Heian Period (794 – 1185)
Named after the newly built capital of Heian-Kyo, today Kyoto. The sculptors mainly depicted new manifestations of the "historic" Buddha in wooden sculptures of massive weight. The second half of the epoch continued the Japanisation of art. Sculptural works gained more graceful elegance and movement. The painting of this period was preserved almost exclusively through the famous Phoenix Hall of Byodo-in. The paintings illustrate delicate colours and a tendency towards soft beauty and roundness of lines. Calligraphy, which was valued more highly than painting in East Asia, became very important.

Kamakura Period (1185 – 1336)
With the founding of the shogunate in Kamakura, a new cultural centre was built. Toughness and warlike spirit determined this golden age of Japanese chivalry. The sculptor Kokai and his descendants created sculptures with deep carvings, strong body modelling and inlaid, naturalistically crafted crystal eyes. The introduction of Zen Buddhism had an impact initially only on architecture, but later on painting as well. The handicrafts created paint equipment, writing implements, toilet boxes, glazed earthenware and ceramic. The art of weapons, the manufacturing of armour and blades for swords experienced their high bloom.

Muromachi Period (1336 – 1573)
It is named after the district of Kyoto where the Ashikaga shogunate had its residence. The profane architecture took over the Shoin style of Zen temples, which resulted in the basic style of Japanese houses today. Teahouses and refined garden art were also developed under the Zen influence. Zen priests cultivated the Japanese ink painting. The magnificent landscape paintings by Sesshu are artistic highlights of that time.

Momoyama Period (1573 – 1603)
It is named after the palace of the commander Toyotomi Hideyoshi on the Momoyama Hill near Kyoto. This period marked by luxury and pomposity is characterised by art that was freed from religious ties and served purely representational purposes. Except for a few, most of the pompous castles were destroyed. The luxury is reflected in rich wood carvings and metal fittings. The castles were decorated with magnificent paintings in vivid colours on a golden background and the metal art was highly developed.

Edo Period (1603 – 1848)
The Edo period is a 250-year period of peace in which bourgeois art and culture developed. Mansions and teahouses were built with sophisticated and simple taste. Decorative painting experienced a new upswing. The initial technique of hand-coloured plates was further developed by the addition of two colour plates into four-colour printing. Ceramics detached from the Chinese-Korean influence and developed a characteristic Japanese style. The porcelain art was enriched by graceful enamel colour painting. The finest and best quality porcelain, which in contrast to the Imari porcelain was not intended for export, was supplied by the Okochi kilns. The new art of netsuke carving emerged, which were worn as a counterweight to Inro (medicine tin) or tobacco pouches on a belt. The era ended with the forced opening of the country by the Americans and the transfer of governmental power to the emperor.

Meiji Period (1868 – 1912)
This was the era of westernisation in all areas of life. Painting developed using European models, but returned to old traditions over time. In 1888, the Tokyo School of Fine Arts took over the promotion of Japanese painting. Sculpture art, however, continued to follow the European models except for one school, that continued with the traditional art of woodcarving.

Select your cookie settings
We use cookies and similar tools to enhance your shopping experience, provide our services, understand how customers use our services so we can make improvements, and display ads. Approved third parties also use these tools in connection with our display of ads. For more information about cookies and how we use them, please click "Configure settings". There you can also manage your cookie preferences.
Currency calculator
Price in EUR
€218.00
Exchange rate:
Stand:
The service is currently unavailable.