Show all categories All Pictures Back
back to overview
Carl Spitzweg:
Picture "The Eternal Bridegroom" (1855-58), framed 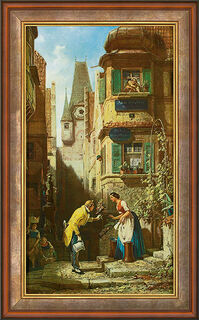 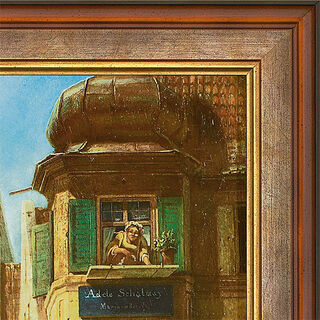 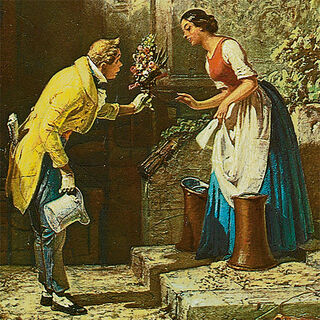 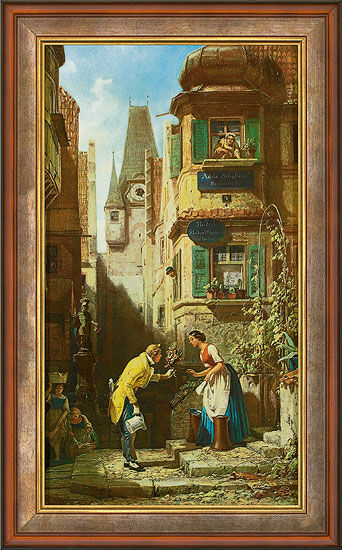 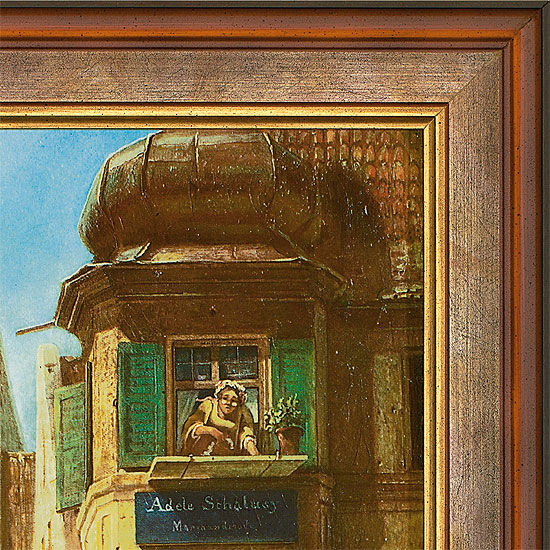 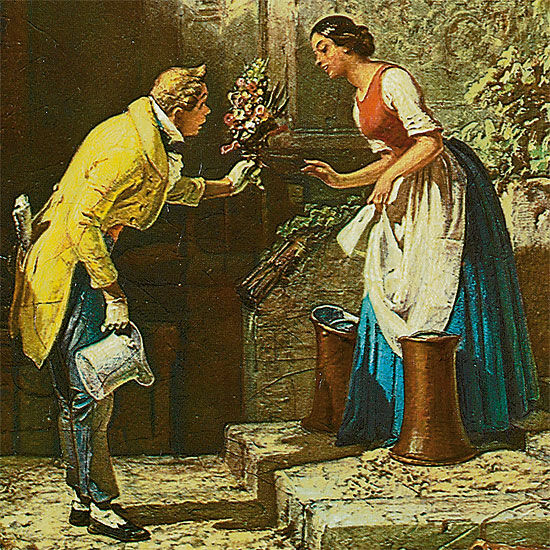 Already during his lifetime, "The Eternal Bridegroom" was the painter's most popular subject: gallantly, the suitor hands a bouquet to his beloved. Spitzweg painted the motif several times with slight variations at the urging of his collectors.
Original: Oil on canvas, privately owned.

High-quality reproduction using the Fine Art Giclée process, handmade on artist's canvas in a patented process and traditionally stretched on a wooden stretcher frame. The motif surface with a tactile and visible linen structure and an additional hand-applied brush structure imitating the original emphasises the painting-like effect of the object. Sealed with artist's varnish. Framed in a fine handmade solid wood studio frame in antique platinum with reddish-brown. Limited edition of 199 copies, with numbered certificate on the back. Size 58 x 36 cm (h/w). ars mundi Exclusive Edition. 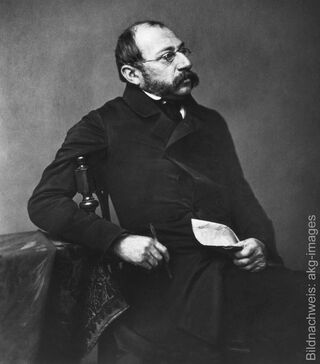 Carl Spitzweg was one of the most important artists of the Biedermeier period. He created numerous paintings, oil studies, drawings and watercolours whose peculiar, a whimsical charm made him the most popular representative of the bourgeois genre and landscape painting in southern Germany.

Spitzweg came from a wealthy Munich merchant family and initially completed a degree in natural sciences. An illness led him to the decision to become a painter. He continued to train himself and soon found connections with other colleagues of the Munich school of painting, such as Moritz von Schwind.

Spitzweg is one of the great German painters and draughtsmen of the 19th century. His best-known pictures, such as "The Poor Poet", the "Bookworm" or the "Eternal Wedding Man", show eccentrics of bourgeois society indulging in their respective hobbies.

Carl Spitzweg's imagination and outstanding painting technique were combined with perhaps the most important ingredient: his sense of humour. With wit and affectionate exaggeration, the inveterate bachelor created character studies of quirky eccentrics and romantic encounters - always told lovingly and with a twinkle in his eye. This is how he became one of the most popular German artists. He chose very small formats and portrayed the figures precisely and in detail in their respective milieu. In this way, he achieved a satirical overdrawing of the types that reached into the grotesque. In his later works, he placed more emphasis on the spontaneous, sketchy and moving, which is particularly evident in his landscape depictions.

He was not discovered by art history until around 1900, and throughout his life, he was never as famous as other contemporary painters.

Art and culture set between Romanticism and Realism in the German-speaking countries in the period from 1815 to approx. 1860. The epoch took its name from the magazine "Fliegende Blätter", where the poems by Swabian schoolteacher Gottlieb Biedermaier were regularly published between 1855 and 1857.

Painting of this period was dominated by intimate, comfortable motifs. Masters of the Biedermeier period include Carl Spitzweg, J. P. Hasenclever, G. F. Kersting. Ludwig Richter distinguished himself as an excellent illustrator.

After the German Centennial Exhibition 1906 in Berlin, the term "Biedermeier" established to describe fashion and furniture of simple, unadorned but high-quality craftsmanship.

Inroom view
Select your cookie settings
We use cookies and similar tools to enhance your shopping experience, provide our services, understand how customers use our services so we can make improvements, and display ads. Approved third parties also use these tools in connection with our display of ads. For more information about cookies and how we use them, please click "Configure settings". There you can also manage your cookie preferences.
Currency calculator
Price in EUR
€440.00
Exchange rate:
Stand:
The service is currently unavailable.