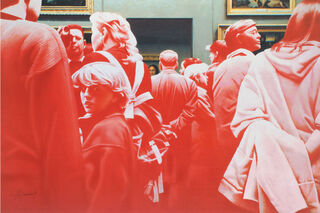 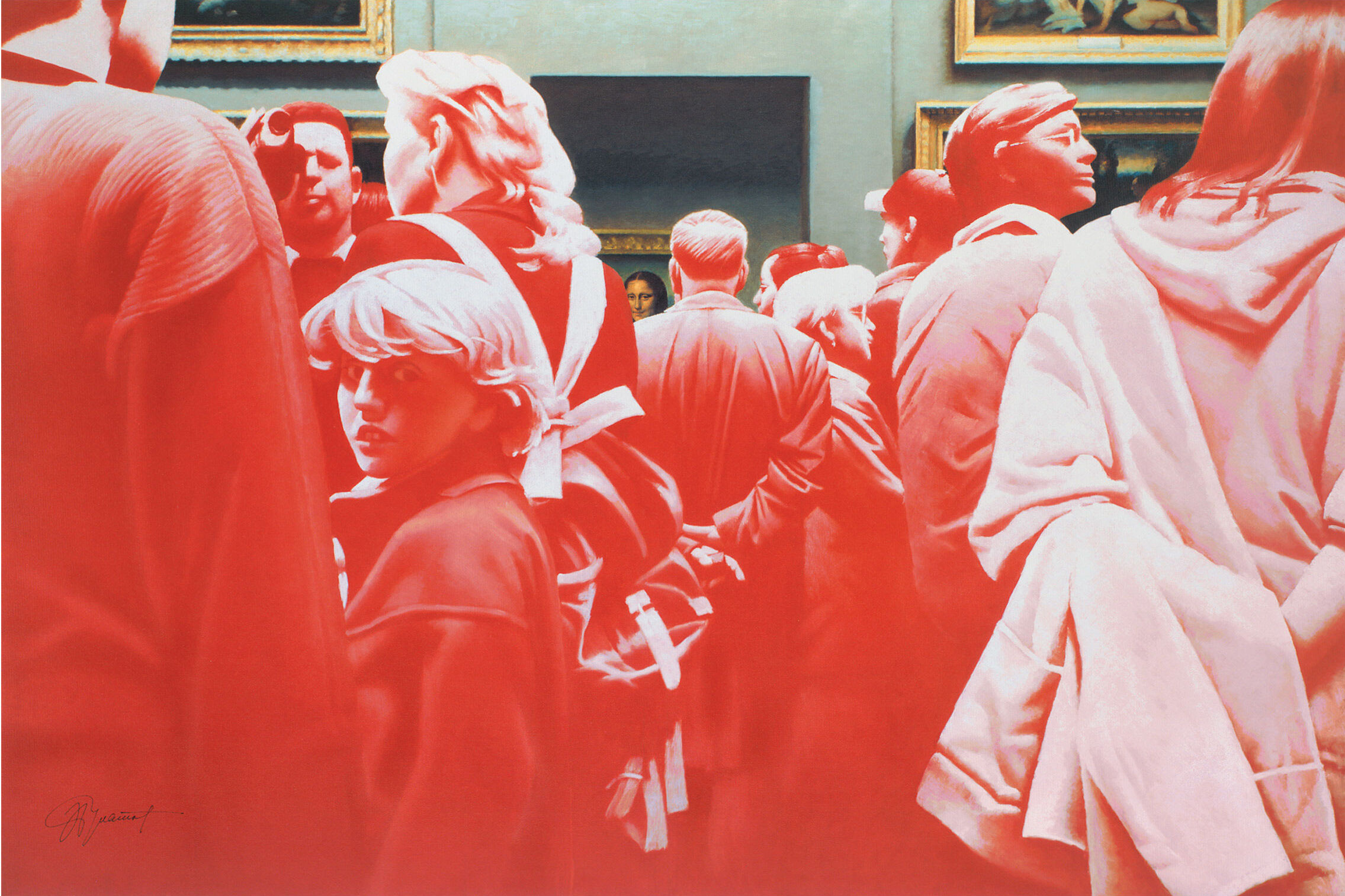 In his work "Louvre - La Gioconda", Bulatov paints a group of visitors in the Louvre in signal red and depicts - unnoticed at first glance - the different characters of the visitors. The boy in the foreground notices the artist and looks at him. In the back of the picture, there is the object of interest, small in perspective and half hidden: Leonardo da Vinci's "Mona Lisa", probably the most famous painting in art history.

The Russian painter Erik Bulatov found himself in complete artistic isolation in the Soviet Union. He was separated from every western development in contemporary art due to the iron curtain. Even at home, interactions with critics and the public was impossible, as Bulatov was not allowed to be an official artist according to the state. In this intellectual vacuum, Bulatov, who earned his living as a children's book illustrator, developed his visual language in which he critically processed Socialist Realism as well as Russian Constructivism.

In order to create an opportunity for oppositional artists to present their work, Bulatov, together with colleagues such as Ilya Kabakov and Oleg Vassiliev, founded the "Sretensky Boulevard Group" in the 1960s, from which the artist group "Moscow Conceptualists" later emerged. But again the governmental regulations of the Soviet art system interfered: in 1965, one of the first exhibitions he took part in Moscow was closed and banned after only one hour. Because of this experience, Bulatov emphasised the liberating power of art: "It has always been my conviction that the sphere of society has limits and that the path to freedom only leads through the sphere of art, which lies beyond these limits. Certainly, I know that this is not the universal path – but for me, it has always been the only possible one."

Erik Bulatov was born in 1933 in Sverdlovsk/Ural. He studied at the Moscow Art School and the Surikov Art Institute in Moscow, from which he also graduated in 1958. Erik Bulatov is one of the most important contemporary artists in Russia today. In 2008 he became an honorary member of the Russian Academy of Art. He lives and works in Paris. He has had solo exhibitions, among others, at the Musée des Beaux-Arts de la Ville de Paris and the Centre Pompidou, the Tretyakov Gallery in Moscow and the Kestnergesellschaft in Hanover.

Recommendations
product
IN-462442 Picture "La Gioconda" (2006), on stretcher frame https://www.arsmundi.de/en/erik-bulatov-picture-la-gioconda-2006-on-stretcher-frame-462442/ https://www.arsmundi.de/thumbnails/4a/5d/f3/1619633104/462442_1_320x320.jpg InStock 798 EUR In his work "Louvre - La Gioconda", Bulatov paints a group of visitors in the Louvre in signal red and depicts - unnoticed at first glance - the different characters of the visitors. The boy in the foreground notices the artist and looks at him. In the back of the picture, there is the object of interest, small in perspective and half hidden: Leonardo da Vinci's "Mona Lisa", probably the most famous painting in art history.<br /><br />Giclée on artist's canvas 2006 after the painting of 1997/98. 199 copies. Signed on the front, numbered on the back. Mounted on a stretcher frame. Size 80 x 120 cm (h/w). /Artists A-Z /Pictures /Pictures/Epochs /Pictures/Techniques /Pictures/Motifs /intern /LP /Artists A-Z/Detailseite (Produktlisting) /Pictures/Epochs/Contemporary /Pictures/Techniques/Giclée /Pictures/All Pictures /Pictures/Motifs/Genre Scene /intern/Produkte /LP/Alle Objekte Erik Bulatov limited, 199 copies | numbered | signed | reproduction, Giclée print on canvas | on stretcher frame | size 80 x 120 cm (h/w) 1 Erik Bulatov 0 0 1 1 0
Foundation Modal

Inroom view
Choose Your Cookie Settings
We use cookies and similar technologies provided by various services to provide you with a better and safer user experience. Some services are necessary for the website to function, whilst others are used to analyse and improve the user experience and are used by us and other approved third-party partners to tailor relevant advertisements for you.
By clicking Accept All Cookies, you give us your consent to use all services that require your consent. You can decline services that are not required by clicking Decline Cookies. You can change your preferences at any time under .
Currency calculator
Price in EUR
€798.00
Exchange rate:
Stand:
The service is currently unavailable.