Categories
back to overview
James Rizzi:
Porcelain Object "Mommy is the Best" 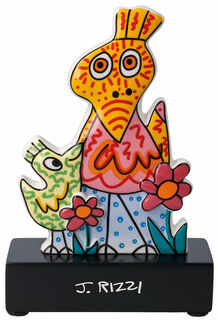 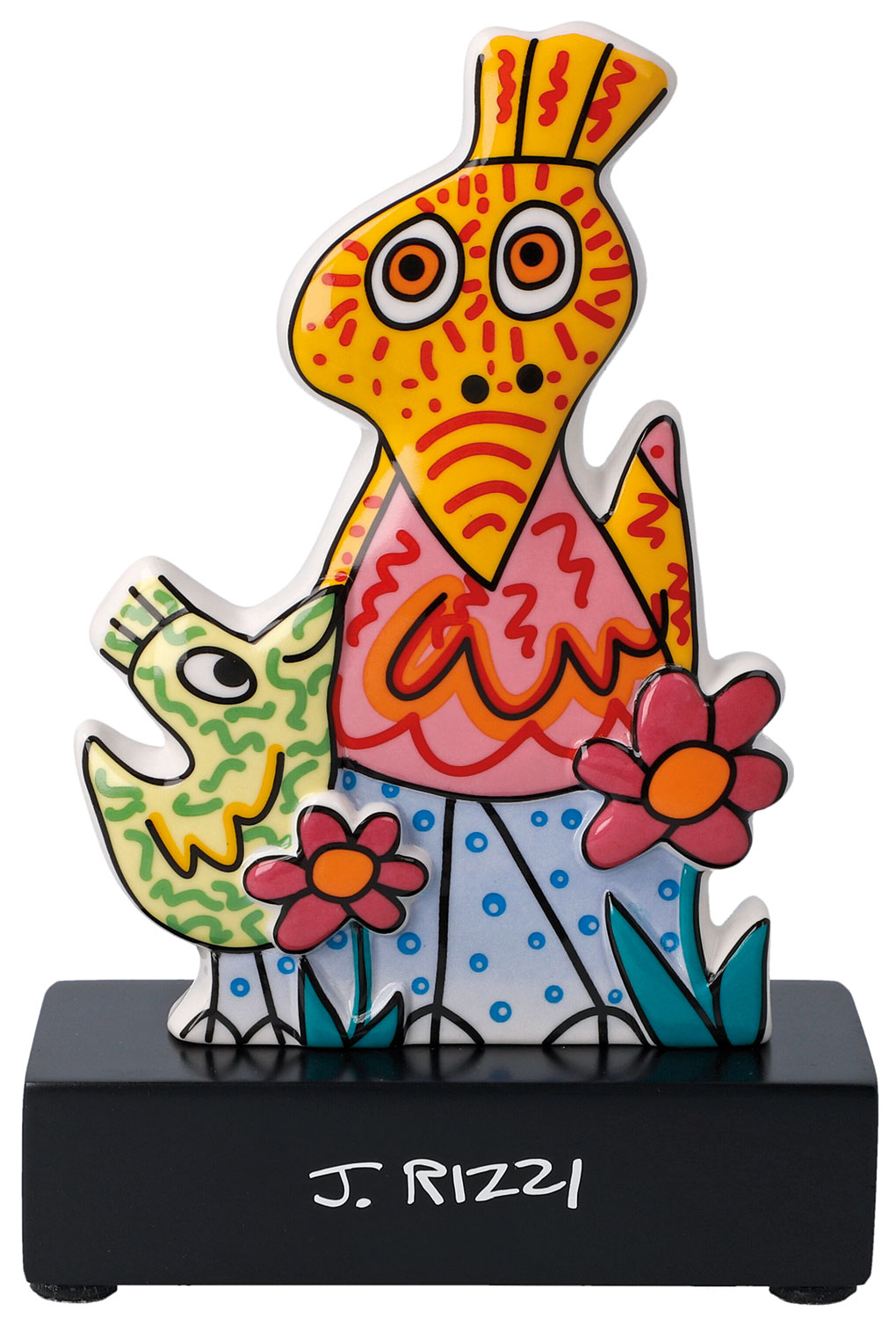 Porcelain Object "Mommy is the Best"

Lively, colourful birds were one of James Rizzi's favourite motifs, along with his hometown of New York. Here, the birds are lovingly presented as a table sculpture designed on both sides. On a wooden base. Size incl. base 15 x 5 x 10 cm (h/w/d). 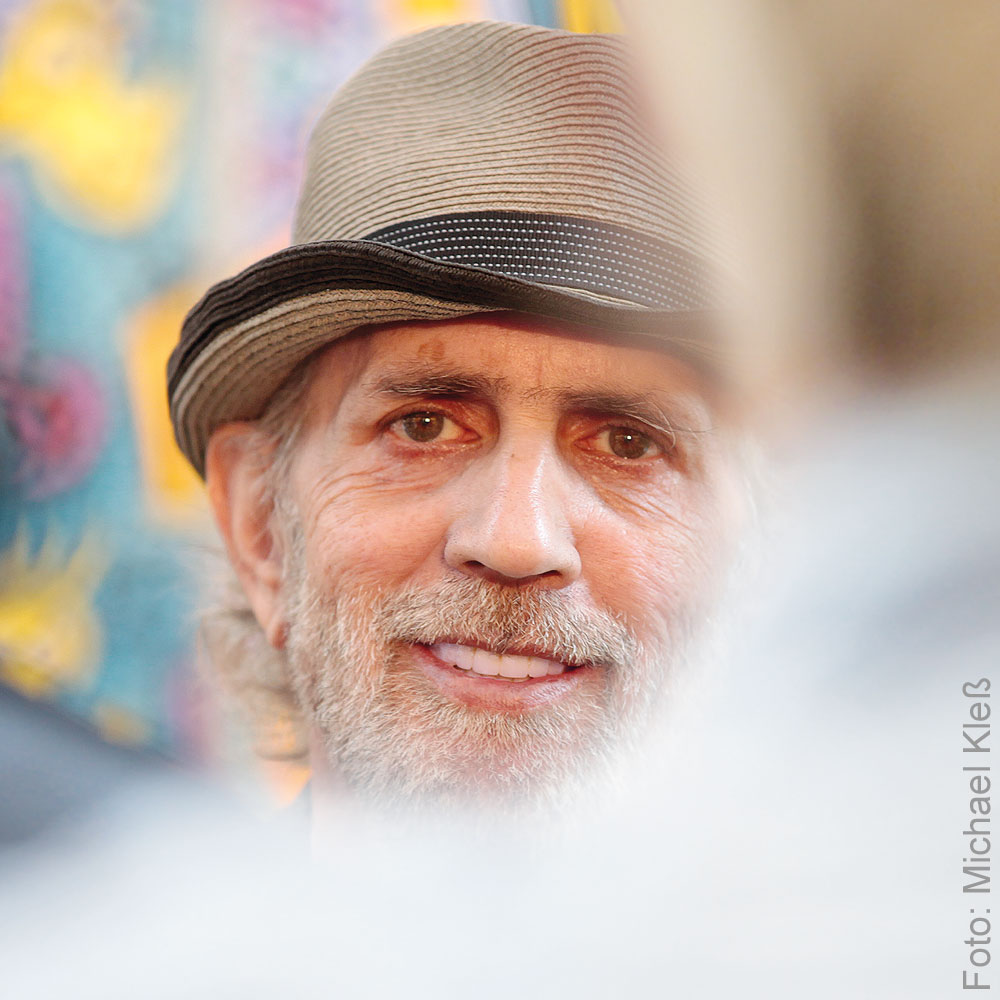 His friends called him Jimmy, and he looked like that nice boy next door. Despite university studies and academic training in painting, etching, lithography and sculpture, James Rizzi miraculously managed to keep the positive traits of children alive within himself: Childlike curiosity, naive joie de vivre, fun with the colourful and the games of the kids with whom he painted dreary house walls. This and many other traits made his works so likeable and popular. Jimmy was a real child of the melting pot of New York before he became famous with his 3D prints.

The painter, graphic artist and sculptor James Rizzi was born in 1950 in Brooklyn, New York, where he also spent his entire childhood. Rizzi initially attended business school at the University of Florida in Gainesville. Gradually, however, changed his major to art and finally graduated in 1974 with a degree in painting, graphic arts and sculpture.

In the first years after his college, Rizzi sold his prints and paintings on the streets outside the Museum of Modern Art and the Metropolitan Museum. In 1977, James Rizzi was asked to present some of his works in the collective exhibition "Thirty Years of American Printmaking" at the Brooklyn Museum, in which Andy Warhol, Jim Dine and Roy Lichtenstein also participated. Since then, he has participated in countless solo and group exhibitions and celebrated successes all over the world.

In addition to consumer merchandise such as T-shirts, hats and ties, James Rizzi has also realised numerous projects. Volkswagen, for example, was able to get ahold the artist for the new release of the "Beetle", as well as the publishing house Brockhaus for its current encyclopaedia. To celebrate the 40th anniversary of the airline Condor, Rizzi designed the outer surface of a Boeing 757 in an exotic pattern ("Rizzi-Bird") that put travellers in the right mood for their holidays. Music posters, CD covers and even the Atlanta Olympics benefited from his cheerful images. The first and only "Happy RIZZI House" was built in Braunschweig as part of the EXPO 2000.

Rizzi's colourful 3D graphics from the world of sport are rare and coveted collector's items with upside potential. For example, the painting "New York Marathon for all" was published in 1997 for a price of US$ 4,500 and was traded at over US$ 15,000 after only 5 years - other paintings achieved even higher increases in value!

He was one of those artists whose ambition was only to create a world of their own with their art. On the occasion of his 60th birthday in October 2010, Rizzi's world's largest exhibition in Bremen (until 4 July 2011) showed just how successful he was.

James Rizzi, who for many years had been regarded as the legitimate successor to the New York Pop Art legends Andy Warhol and Keith Haring, lived and worked in New York's Soho district until his sudden death in December 2011.

Ceramic product made of kaolin, quartz and feldspar.

Porcelain is formed by turning or pressing and figurative objects are cast. Complex objects have to be cast in separated steps and sections and then "assembled". After the moulding, the pieces are dried and "annealed" at about 900 °C. Next, the glaze will be applied and fired at temperatures between 1,240 °C and 1,445 °C. In renowned manufactures, the porcelain is painted by hand whereby each colour has to be fired individually and in compliance with narrow temperature tolerances.

Porcelain was invented in China and became widespread in Europe from the 16th century onwards. The first European porcelain factory was founded in Meissen, Germany in 1710.

Other famous European porcelain factories include Fürstenberg, Höchst, Schwarzburger Werkstätten, Lladró, Nymphenburg, KPM, Augarten, Sèvres, Limoges, Royal Copenhagen, Worcester. Individual factories label their products with their personal porcelain stamps so that for the collecter it is easy to identify their origin.

Select your cookie settings
We use cookies and similar tools to enhance your shopping experience, provide our services, understand how customers use our services so we can make improvements, and display ads. Approved third parties also use these tools in connection with our display of ads. For more information about cookies and how we use them, please click "Configure settings". There you can also manage your cookie preferences.
Currency calculator
Price in EUR
€79.00
Exchange rate:
Stand:
The service is currently unavailable.