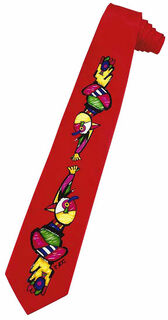 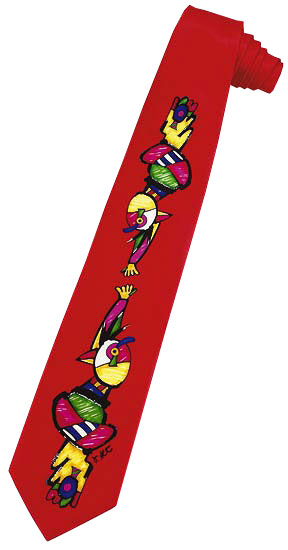 Printed and rolled hem by hand in 12 colours on 100% crepe satin. Red version.

Otmar Alt was born in Wernigerode, Germany on 17th July 1940. After studying painting at the Berlin school of arts and crafts and the Berlin University of the Arts, he quickly advanced to the artistic avant-garde and is now one of Germany's most important - and incidentally most popular - artists.

Otmar Alt's artistic repertoire ranges from painting and graphic art to sculpture. But he also designs everyday objects such as children's toys and fairy-tale figures made out of ceramics. So far, he has presented his works of art to the European public in over 250 solo exhibitions. Otmar Alt has been inspiring the world of art with his colourful and cheerful works. The main representative of the "New Figuration" succeeds in taking the viewer into his imaginative dream world.

The symbolic fairytale imagery in Otmar Alt's works awakens memories of a carefree childhood in the viewer. This is especially evident in his depictions of animals. The strong abstraction of his pictorial language makes the figures seem like fantasy creatures. Therefore, the children's books he illustrates not only inspire the little ones.

His style, which has developed into a design of its own and is sometimes reminiscent of comic strips, is based on the movement of informal painting. Otmar Alt creates an idiosyncratic world of fable populated by imaginatively shaped people, animals and plants. His drawing repertoire is built up from animal mythological and biomorphic archetypes. The geometric and two-dimensional forms attain a lively effect through the ornamental colourfulness and fit perfectly together like puzzle pieces.

The successful artist established the Otmar Alt Foundation years ago and uses the income from his art to support young artists in many ways, including providing studio space in a Westphalian farmhouse.

Select your cookie settings
We use cookies and similar tools to enhance your shopping experience, provide our services, understand how customers use our services so we can make improvements, and display ads. Approved third parties also use these tools in connection with our display of ads. For more information about cookies and how we use them, please click "Configure settings". There you can also manage your cookie preferences.
Currency calculator
Price in EUR
€19.00
Exchange rate:
Stand:
The service is currently unavailable.