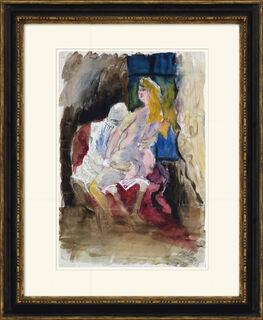 Otto Dix, born in Gera, Germany in 1891, studied at the Dresden Academy of Fine Arts and Crafts and served as a volunteer for the German Army in the First World War. During this time, he produced gouaches and drawings that focused on the events of the war. When he returned he studied again.

After experimenting artistically with Expressionism, Futurism and Dadaism, Dix finally found his style in an exaggerated Realism with which he held up a mirror to society. As one of the main protagonists of New Objectivity, Dix became one of the most famous German artists and one of the chroniclers of his time. World-famous is his "Big City Triptych" (1927/28), with which Dix created a classic of the New Objectivity.

In 1933, Dix lost his professorship at the Academy of Fine Arts in Dresden due to degeneration by the Nazis, whereupon he moved to the south of Germany, where he mainly created landscape paintings.

In his late work after 1945, Dix returned to the expressionist style of his early years and turned from glaze painting to wet-on-wet painting and lithographs. His late graphic work includes portraits of animal with experimental lines and colouring, showing a series of technically different, expressive works with the same motif – cat and rooster. From 1949 onwards he began to discover the rooster as one of his motif, which appeared repeatedly in his works in the following years, for example in the pencil drawings on watercolour handmade paper "Lake Constance, Landscape with Rooster" from 1954 and "Rooster before Sunrise" from 1950-1955 as well as "Peter and the Rooster", a colour lithograph from 1958.

His ambivalent, as well as committed realism, has not lost its explosive power to this day. "I strive to arrive at the sense of our time in my paintings, because I believe that a painting must above all address a content, a theme. Painting is an attempt to create order, art for me is banishment."

Paintings with glazing watercolours, that are characterised by their transparency, which let deeper layers and painting surfaces shine through.

Often the paper surface is omitted. This contributes significantly to the effect of the work. The aquarelle painting requires skilful use of colour, as it dries quickly and corrections are almost impossible.