Categories
back to overview
Prince's Cup 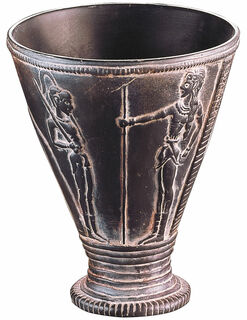 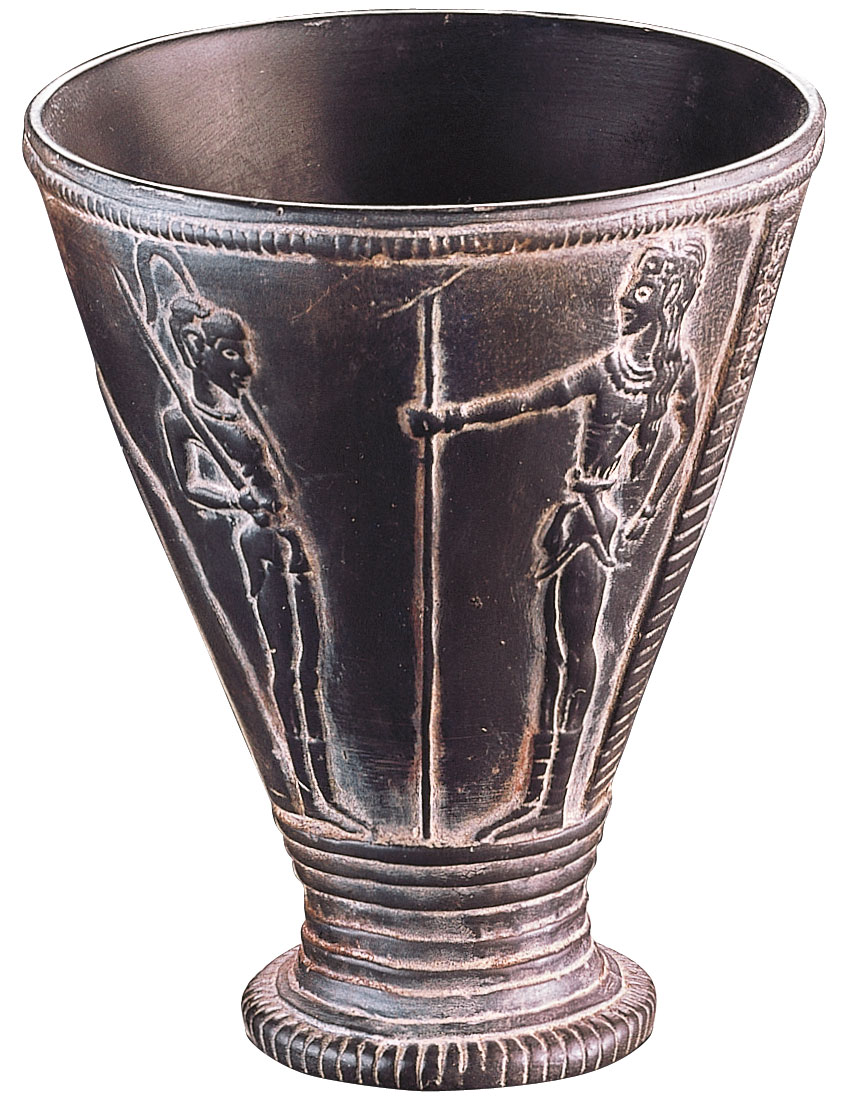 German archaeologist Heinrich Schliemann discovered significant evidence of this culture in the shaft graves of Mycenae, which had its heyday in the 14th and 13th centuries B.C. A well-preserved testimony is the Lion Gate from the 13th century B.C.

Splendidly decorated vases are the artworks of ceramics that have best survived the turmoil of millennia. The Snake Goddess (around 1500 B.C.), a faience figurine, that has been discovered in the Repositories Temple of the Knossos palace are also famous. Bronze vessels of that time were primarily used in the household. Daggers, swords and armour were also made of bronze.

The jewellery of the Cretan-Mycenaean ladies was made of gold, rock crystal, lapis lazuli, ivory, faience and glass.

Geometric art
The geometric art developed as a continuation of the late Mycenaean art on the Greek mainland towards the end of the late 11th century B.C. Mathematically regulatory will of style entered the geometric art replacing the natural Crete-Mycenaean formal language. Another new feature was the use of the ruler and the compass. The jewellry of this time is also based on strict geometric principles.

Archaic art
The art of building developed on the temples developed in the 8th and 7th century B.C. Initially, mudbrick and wood were used for building, later the forms were transferred to stone. A monumental style developed in sculpture. Marble, bronze, clay and limestone were used as materials. Gods, heroes, victorious competitors were embodied in typical young nude statues. However, gods or other consecration figures were portrayed in clothes.

In addition to freestanding sculptures, relief art developed, which was preferably used for decoration of temples.

Statuettes made of clay and bronze first appeared in the 6th century B.C. They depicted humans, animals and mystical beings and are of high quality.

Classical art (5th and 4th century B.C.)
The beginning of the Greek Classical period coincides with the time of the great statesman Pericles. Because of his democratic politics, Athens became the centre of cultural life and artistic creation in ancient Greece.

The classic architecture refined the shapes and proportions to perfection. The Temple of Zeus at Olympia, the Parthenon on the Acropolis of Athens and other major temple buildings were built in that time.

In the field of sculpture, the time of the Severe style began. The rigid forms of the earlier period were outdated, the human body was studied anatomically. Top works of the Severe style include the Charioteer of Delphi and the Artemision Bronze, which was recovered from the sea by fishermen.

In the 4th century, a romantic conception prevailed. Praxiteles and Lysippos determined the art of the time. Sculptures such as "Hermes and the Infant Dionysus", "Pouring Satyr" and especially the "Aphrodite of Knidos" are magnificent examples of the artistic conception of Classical Greece.

Hellenistic art
With Alexander the Great's campaigns of conquest, the Greek art dominated the Mediterranean and the Orient. In the temple construction, the Ionic and Corinthian style prevailed.

Lysippos initiated the sculptural art of the Hellenistic period. The temple complexes, such as the one in Pergamon, were richly decorated with statues. The "Winged Victory of Samothrace" was created at the beginning of the 2nd century B.C. and the "Venus de Milo" – towards the end of the century. The era of Hellenistic sculpture reached a final climax with "Laocoön Group". The Painting of that period was determined by Apelles. The Hellenistic painters depicted themes like historical events, portraits and genre paintings.

Select your cookie settings
We use cookies and similar tools to enhance your shopping experience, provide our services, understand how customers use our services so we can make improvements, and display ads. Approved third parties also use these tools in connection with our display of ads. For more information about cookies and how we use them, please click "Configure settings". There you can also manage your cookie preferences.
Currency calculator
Price in EUR
€108.00
Exchange rate:
Stand:
The service is currently unavailable.