Categories
back to overview
Rembrandt:
Picture "The Holy Family" (1645), framed 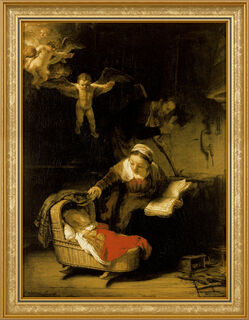 Rembrandt Harmenszoon van Rijn was the most important painter of the 17th century, also known as the Dutch Golden Age. In addition to painting, Rembrandt also mastered drawing and etching to perfection and developed entirely new dimensions in printmaking.

Rembrandt's trademark was the unique depiction of light and shadow – painting from the dark: his principal motifs appear as if on a stage in the spotlight, the background disappears into the darkness. These strong contrasts give Rembrandt's paintings a special, luminous drama and liveliness.

Rembrandt Harmensz. van Rijn was born in Leiden on 15 July 1606. In 1623, he became a student of Pieter Lastman in Amsterdam, but he did not move there until 1631, for initially, he still worked in his hometown.

Illustrating the emotions of the sitter was always one of Rembrandt's central concerns. His more than 100 self-portraits, which show him in changing disguises and various psychological studies, bear witness to this. The loving and sensual portraits of his wife Saskia and second wife Hendrickje Stoffels, with whom he had lived since 1649, can also be understood in this way. The wedding in 1634 with Saskia von Uylenburgh enabled the couple and their son Titus, who was born in 1641, to live a financially carefree life and receive many commissions. But after Saskia's death in 1642, the painter fell into ever greater financial difficulties and died on 4 October 1669 heavily in debt.

The attribution of many of Rembrandt's works is still difficult today, as the apprentices of his large workshop quickly adapted his style. Biblical scenes are the most frequent subject matter, interspersed with historical and mythological motifs. His group portraits were a novel conception of portraiture, for, as in the self-portrait, Rembrandt revealed the human appearance through subtle empathy with individuality. Moreover, the life-size figure paintings revolutionised the understanding of the Baroque group portrait.

His early work is characterised by the dramatic use of light and shadow and a careful rendering of the material. But in the last years of his life warm brown and red tones and an internalised expression led to a calming of the pictorial action. He complemented his extensive oeuvre of paintings with numerous etchings and hand drawings.

Epochal term for the art of the 17th century. The Baroque style of art, which originated in Rome around 1600, permeated visual arts, literature and music practically all over Europe within a very short period of time and lasted until 1770 in the visual arts. The last phase is generally characterised by Rococo.

Characteristic features include: the pulsating movement of all forms, the abolition of boundaries between architecture, painting and sculpture, that resulted in the epoch typical "Gesamtkunstwerk" ("total work of art"), and especially the purposeful use of light, which became an important artistic component. The subordination of the individual parts to the whole resulted in the creation of a unified and, at the same time, dynamic space, which is fully expressed in the magnificent buildings of this period.

The Baroque art, with its penchant for grandeur, splendour and rushing abundance, clearly reflects the desire for representation, which was a concern of secular and ecclesiastical, especially the Catholic, patrons of the time, who were strengthened by the Counter-Reformation. In painting, characteristic features of the Baroque, are manifested in the altar and ceiling painting, history and portrait.

Typical representatives include artists such as Anthony van Dyck, Peter Paul Rubens as well as Gian Lorenzo Bernini in the field of sculpture.

Select your cookie settings
We use cookies and similar tools to enhance your shopping experience, provide our services, understand how customers use our services so we can make improvements, and display ads. Approved third parties also use these tools in connection with our display of ads. For more information about cookies and how we use them, please click "Configure settings". There you can also manage your cookie preferences.
Currency calculator
Price in EUR
€330.00
Exchange rate:
Stand:
The service is currently unavailable.