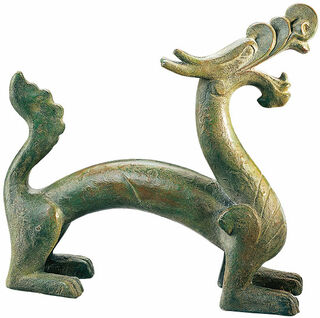 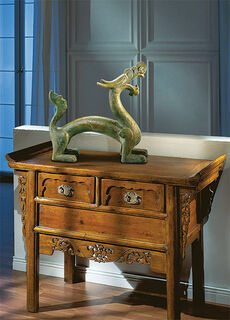 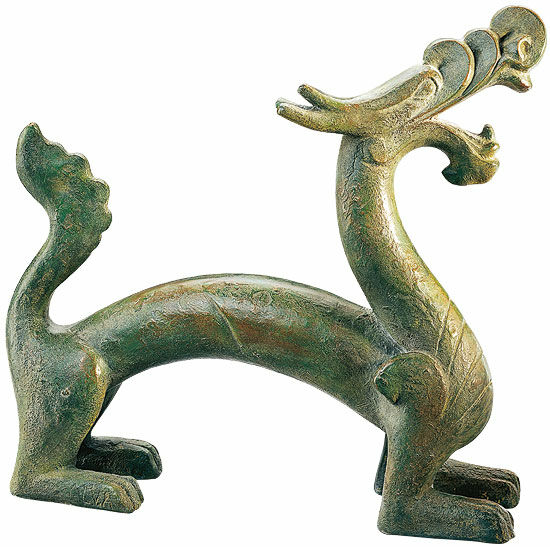 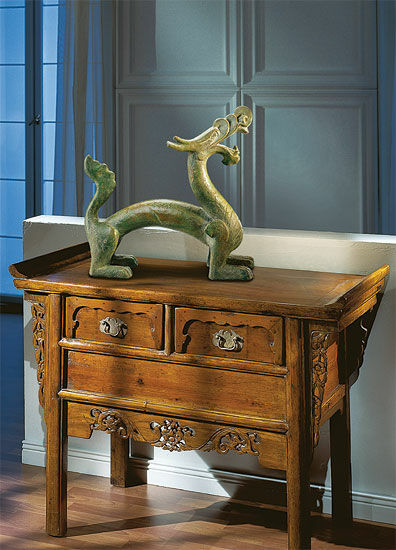 Unbelievable, yet true: this sweeping and downright modern-looking lucky dragon faithfully reproduces an ancient model from the Han dynasty! Bring the power of the dragon into your home - with the original object of the ancient emperors of China...
Polymer ars mundi museum replica cast by hand with bronzed, hand-patinated surface. Size 30 x 9 x 30 cm.

The earliest pieces of evidence of Chinese art are the finds from the Late Neolithic (around 5000-2000 B.C.) of the cultures named Honan and Lungshan after their localities. The art of the Shang Dynasty (16th century to 11th century B.C.) is represented by sacred bronzes, bronze weapons, pottery and jade carvings, which were excavated in the area of today's Changzhou. During the Chang-kuo period (481 - 222 B.C.), the independence of the feudal lords led to the flourishing luxury in the princely tombs. In the Hupeh province, bronze mirrors, chimes and demon-repelling head masks as well as wooden figures, jade carvings and embroidered silk gauzes were excavated.

Western Han Dynasty (206 B.C. - 9 A.D.)
China's supremacy in Central Asia is testified to by numerous archaeological finds. Amongst the most important was the jade burial suit of Princess Tou Wan consisted of 2160 plates of solid jade connected with gold wires, discovered in a burial mound, 150 km southwest of Beijing in 1968. In addition to numerous grave goods, the world-famous lamp of Mancheng, a bronze sculpture of a palace servant was also discovered there. Stone reliefs and murals depict historical themes and bear witness to the high level of art of this period.

Six Dynasties Period (221-589)
In the third century, Buddha and Bodhisattvas first appeared in the decoration of mirrors and as gold-plated small sculptures. Poetry, calligraphy and music gained importance.

Tang Dynasty (618-906)
Under the Tang rulers, a unified China grew into a cosmopolitan empire. The highly developed gold- and silversmithing shows the influences of foreign cultures. The presence of foreigners can also be seen in the ceramic tomb figures of this time.

Song Dynasty (960 - 1279)
The characteristic of the painting of the Northern Song period is the development of a specifically Chinese landscape painting. During the Song period, ceramics experienced an artistic peak.

Yuan Dynasty (1279 - 1368)
Although painting and calligraphy were not encouraged by the rulers, they developed to new heights. Towards the end of the Yuan period, the first blue and white porcelain were produced.

Ming Dynasty (1368 - 1644)
This period marked the emergence of the first book printing and the printing of colour woodblock. Art connoisseurship and collecting increased. In painting, new levels of high performance have been reached. The Ming Dynasty of the 15th century is the golden age of blue and white porcelain and porcelain with copper or iron red underglaze painting.

Ch'ing and Qing Dynasty (1644 - 1912)
The art traditions of former periods were continued. As before, the painting played a significant role. The porcelain art of the period is of high quality. In addition to blue and white porcelain, opaque products from bisque porcelain were increasingly manufactured. Chinese porcelain is a popular collection object since the 17th century.

Select your cookie settings
We use cookies and similar tools to enhance your shopping experience, provide our services, understand how customers use our services so we can make improvements, and display ads. Approved third parties also use these tools in connection with our display of ads. For more information about cookies and how we use them, please click "Configure settings". There you can also manage your cookie preferences.
Currency calculator
Price in EUR
€480.00
Exchange rate:
Stand:
The service is currently unavailable.