Show all categories Africa Back

Africa has produced a very diverse body of sculptural work over the last millennia. Finely crafted portraits of kings and rulers, animal motifs or even masks are famous from African history. Contemporary African sculptures are also full of life and innovation. 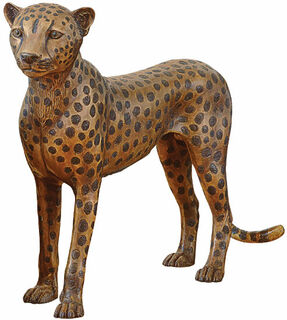 Art from Africa: Thousands of Years of Tradition and Contemporary Works

Africa has a long tradition of fine arts and crafts. As a continent with countless different languages and cultures, Africa developed, over the millennia to the present day, a very diverse art of painting, printmaking, sculpture, object and installation art, film, photography and performance. The art of sculpture was first documented in Africa around the sixth century BC. The oldest known African figures are terracotta sculptures of the Nok culture.

At the beginning of the 20th century, African art had a great influence on European art. Many modern artists such as Pablo Picasso, Ernst Ludwig Kirchner and Amedeo Modigliani, were inspired by the aesthetics of African figures, decorations, and masks. Even today, African art is very popular in Europe. For example, African decorative figures, African statues, or African wooden figures. Here at ars mundi, you can buy African figurines.

In the basic pictorial themes, traditional African sculptures hardly differ from those of European sculpture. Just as the visual arts in Europe were strongly influenced by religion and mythology for centuries, the art of Africa often found its motifs in gods and spirits. In addition, the sculptors depicted many real people in their works, such as kings and rulers, as well as simple farmers. In addition, the continent's animal world was often depicted in sculptures, for example, elephants, birds, or lions. Many African figures were created for festive occasions and ceremonies such as initiation or funeral rituals, and some sculptures were used to express reverence for ancestors. The materials used for African figures were initially of purely natural origin, for example, ivory, raffia, stone, or wood. Later, clay for pottery and various metal alloys such as bronze, brass or copper were added. Sculptors often used mixed techniques and decorated metal sculptures with ivory or precious stones.

For some time now, the interest in African art has been growing noticeably both in the art market and in research and science. Many renowned auction houses regularly offer African sculptures and other works of art. African figures and paintings are regularly sold for millions of dollars at Sotheby's, Christie's, Arthouse and other auction houses. Moreover, the importance of African art is growing in the field of research. Besides, there are now museums all over the world that are either completely dedicated to African art or have large departments in which they show African figures, paintings, installations, and other works. These art houses include, among many others, the National Museum of African Art, Washington D.C., the Museum Fünf Kontinente, Munich, the Ethnological Museum, Berlin, the Afrika Museum, Berg en Dal/Netherlands, the Royal Museum for Central Africa, Tervueren/Belgium and the Weltkulturen Museum, Frankfurt am Main.