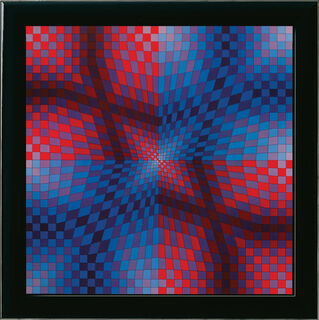 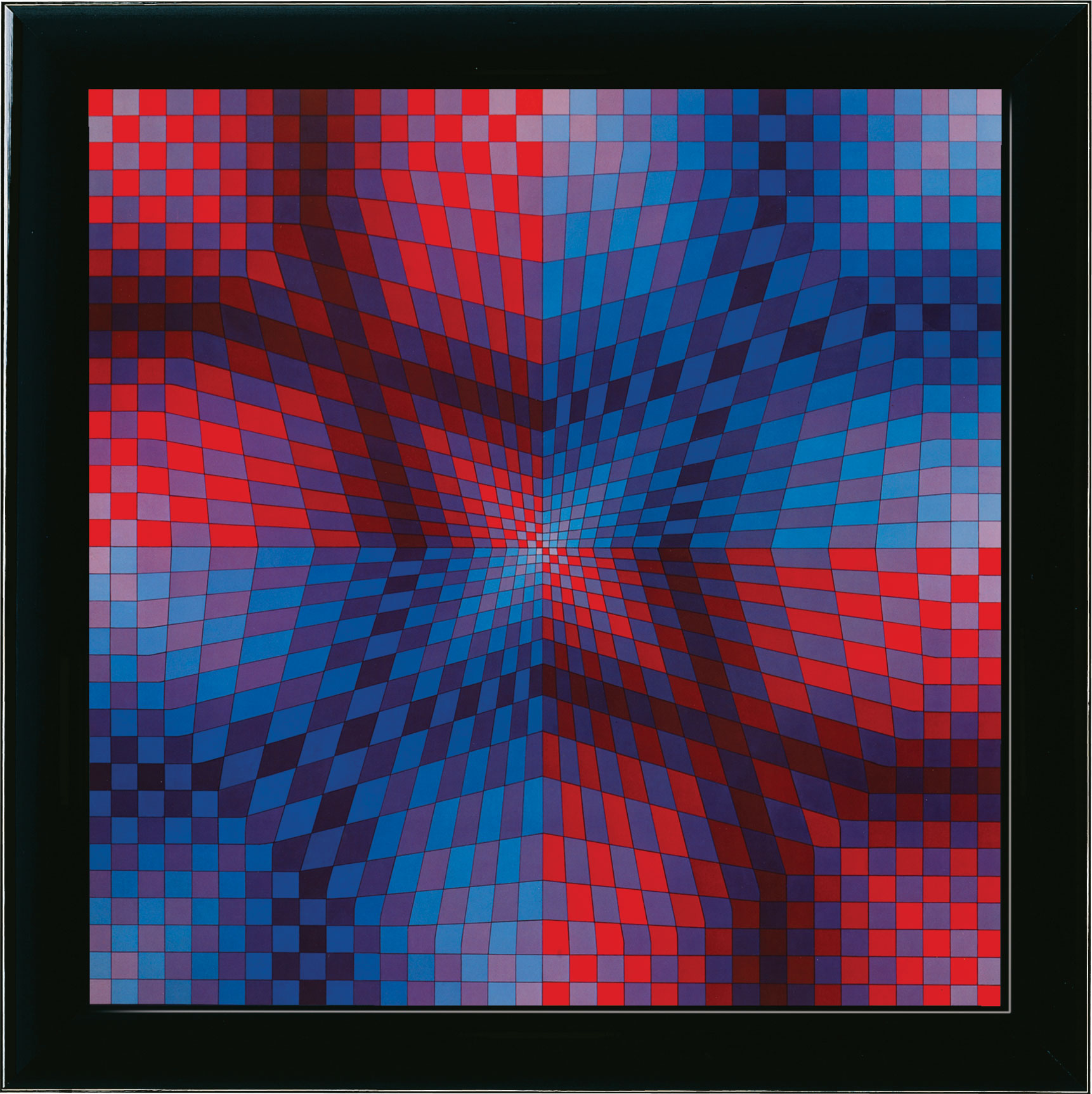 In a unique way, the artist Victor Vasarely (1908-1997) combined form and colour to create powerful, always startling visual effects, dominating the art scene of the 1970s and 1980s. His designs were used in a wide variety of fields, from architecture to fabric design.

Vasarely's work "Tuz" from the portfolio "Progression 2" from the 70s was reproduced in Switzerland and high-gloss foil laminated to emphasise the brilliance of the colours. Sheet size 41 x 41 cm. Framed in a black lacquered solid wood frame with passe-partout, glazed. Frame size 49 x 49 cm.

Hungarian-born Victor Vasarely dominated the art scene of the 1970s and 1980s with his play of colour and form in the optical conception of space.

Victor Vasarely created a new art movement which is called Op Art (optical art). It is characterised by refined spatial suggestions and the play with geometric forms. In a unique way, he combined patterns and colour to create powerful visual effects, that never ceased to amaze.

Vasarely received his artistic training at the Budapest art school "Mühely" (lit. "Workshop"). This school taught above all the ideas of the Bauhaus. Thus, Vasarely first worked as a graphic artist after moving to Paris in 1930, since the basic idea of the Bauhaus was to integrate art into everyday life.

Based on the teachings of the Bauhaus masters Klee and Kandinsky, Vasarely became intensively involved with the geometric language of form. From 1947 onwards, he developed an independent geometric abstraction, whose variations lead to optical pictorial patterns with kinetic effects. The artist arranged geometric patterns in bright colours in a way that the impression of movement is given to the human eye.

Vasarely's sophisticated way of suggesting space, his play with squares, rhombuses, ellipses, trapezoids and stripe effects were based on the idea of not viewing form and colour separately, but as a unity, a "unités plastiques". He found out that calm abstract compositions could be translated into vibrant and iridescent patterns by repeating the individual geometric elements several times, rotating or mirroring them by a few degrees. A high degree of uniformity and brilliant optical effect characterises these works.

Vasarely is thus considered one of the founders and main protagonists of Op Art. At this point, Vasarely had already quit his profession as a graphic artist and earned his living entirely from art. Regular participation in the documenta and several museum exhibitions devoted entirely to Vasarely's work followed.

Today, Vasarely is regarded as an artist whose art has had a significant influence on our way of seeing. His designs are extremely popular and have been used in a wide variety of fields: from architecture to fabric design. One of his most famous works is still encountered almost daily in everyday life: the diamond logo designed in 1972 for Renault.

Visual art that programmatically focuses on optical effects. It is based on geometric patterns and colour sequences that evoke kinetic motion and flickering effects in the human eye.

One of the most famous masters of Op art is the painter Victor Vasarely, who passed away in 1997.

Select your cookie settings
We use cookies and similar tools to enhance your shopping experience, provide our services, understand how customers use our services so we can make improvements, and display ads. Approved third parties also use these tools in connection with our display of ads. For more information about cookies and how we use them, please click "Configure settings". There you can also manage your cookie preferences.
Currency calculator
Price in EUR
€198.00
Exchange rate:
Stand:
The service is currently unavailable.