The true nature of the body is three-dimensional, haptic. This is what detail artist Willi Kissmer devoted himself to in his sculptural works. The invisible side, which creates a subtle tension in his paintings, can now be seen. Kissmer succeeded in maintaining the crackling eroticism of the motif all around with his sensitive, almost hyperreal language of form based on his graphic talent. The enveloping fabric turns into an essential ingredient for visual pleasure. Kissmer concentrated on the expressive centre of the female body and made it a highly personal projection surface for the viewer. This is what makes the works of the internationally renowned artist perfect.

Willi Kissmer was born in Duisburg, Germany in 1951. He studied graphic art under Prof. Hermann Schardt at the Folkwangschule in Essen. His study trips made him travel to Italy, South America and Russia. A stay in India followed in 1987.

The international importance of his work is evident through exhibitions in Portsmouth, New York, Moscow, St. Petersburg, Basel and the Lehmbruck Museum, in Duisburg.

Even though the internationally renowned artist worked with photographic originals, his works are not characterised by a simple photographic realism. He carefully arranged the black-and-white photographs he had previously taken until the posture of his model and the drape of her clothing, in fact until every little detail corresponded exactly to his ideas. On this basis, Kissmer produced photo-realistic oil paintings in elaborate detail work, in which he approached the "reality" behind the image step by step. The results are images that hyper-realistically exaggerate the photographed arrangement – and which, as a coloured oil painting, appear much closer, more precise and above all more vivid than a mere photograph ever could.

The true nature of the body is three-dimensional and haptic. This is what detail artist Willi Kissmer devoted himself to in his sculptural works. The invisible side, which creates a subtle tension in his paintings, can now be seen in his sculptures. With his sensitive, almost hyperreal visual language based on his graphic talent, Kissmer succeeds in maintaining the electric eroticism of the motif. The wrapping fabric becomes an unmistakable spice in the visual pleasure. Kissmer concentrated on the expressive centre of the female body and made it a highly personal projection surface for the viewer. It is through this that the works of the internationally renowned artist are perfected. 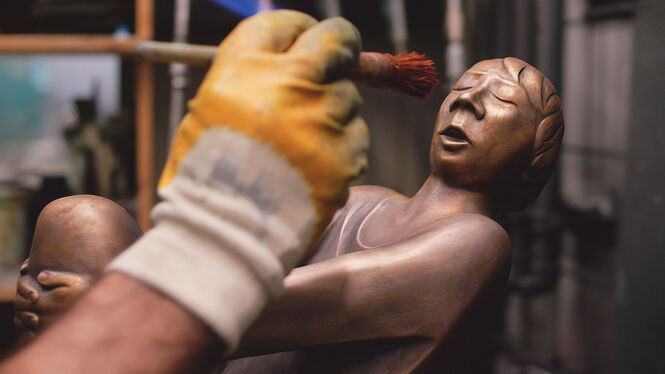 Select your cookie settings
We use cookies and similar tools to enhance your shopping experience, provide our services, understand how customers use our services so we can make improvements, and display ads. Approved third parties also use these tools in connection with our display of ads. For more information about cookies and how we use them, please click "Configure settings". There you can also manage your cookie preferences.
Currency calculator
Price in EUR
€3,880.00
Exchange rate:
Stand:
The service is currently unavailable.