Categories
back to overview
Wolf Gerlach:
Picture "Towards the Top", framed 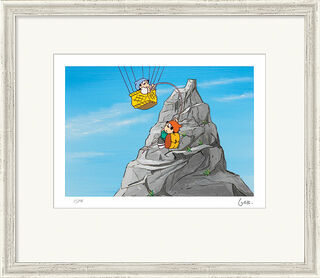 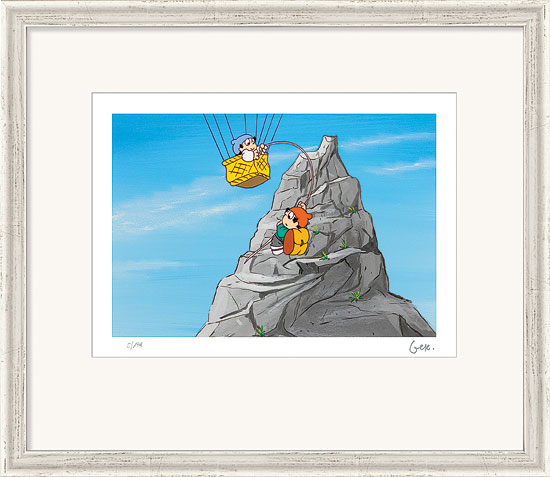 Picture "Towards the Top", framed

The Mainzelmännchen learned to walk on the drawing board: On so-called cels, painted foils for foregrounds and backgrounds.
To celebrate their 50th stage anniversary in April 2013, we are offering the limited reproduction of this cel - which their inventor Wolf Gerlach drew for the production - as a colourful Giclée print on 308g Hahnemühlen handmade paper. The colours of the original are shown to their best advantage thanks to the high resolution and excellent paper quality.

1928-2012 - versatile artist, inventor of the Mainzelmännchen

Born in Pomerania, Germany, in 1928, Wolf Theodor Gerlach spent his youth living on the North Sea island of Langeoog. The technology and equipment of the performing arts seem to have aroused the young man's interest. After an apprenticeship as a film architect, stage and costume designer, he had his first job in Oldenburg, then Braunschweig and Wiesbaden. At the beginning of the 1960s, Gerlach devoted himself to advertising films and in 1963, for the launch of the public-service television broadcaster ZDF, he created the animated station-identity mascots "Mainzelmännchen".

Gerlach, dissatisfied with all the attempts of dedicated dubbing actors to give his characters the right voice, dubbed them himself in the first few years. And just as the distinctive voice and manner of speaking of actor Hans Paetsch heard on fairy tale records enchanted generations of children and their parents from the 1960s onwards, Gerlach spoke his way into the hearts of television viewers with the famous greeting that he invented and crowed: "Gud'n Aaamd" a dialect coloured "Guten Abend" ("good evening"). His mischievous, cheeky and impertinent characters will always be with us.

Select your cookie settings
We use cookies and similar tools to enhance your shopping experience, provide our services, understand how customers use our services so we can make improvements, and display ads. Approved third parties also use these tools in connection with our display of ads. For more information about cookies and how we use them, please click "Configure settings". There you can also manage your cookie preferences.
Currency calculator
Price in EUR
€320.00
Exchange rate:
Stand:
The service is currently unavailable.