Show all categories Animals Back
back to overview
Alexander Koester:
Picture "Ducks on the Lakeshore", on stretcher frame 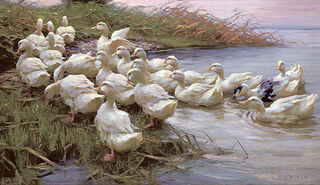 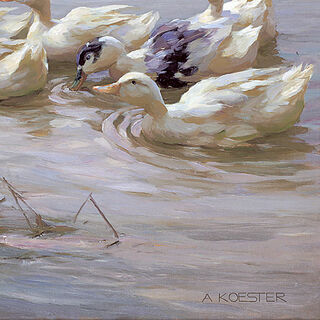 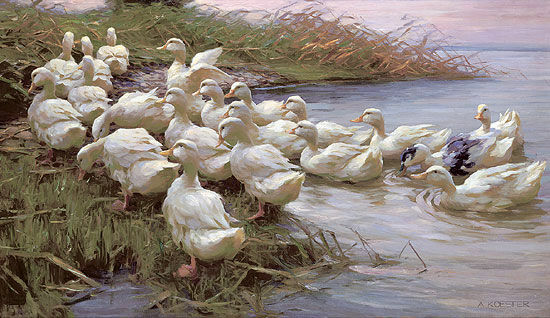 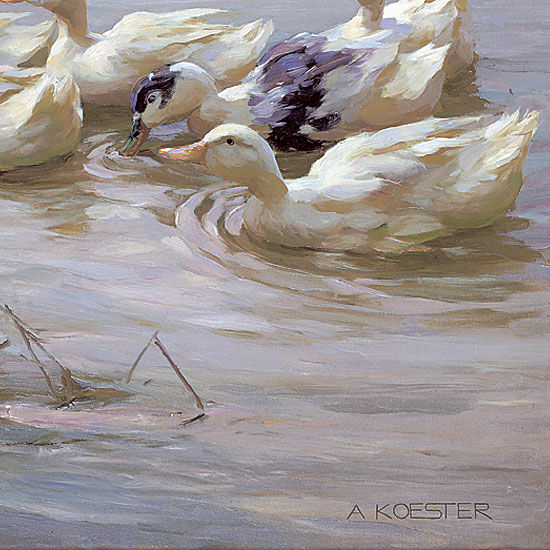 Alexander Koester:
Picture "Ducks on the Lakeshore", on stretcher frame

Picture "Ducks on the Lakeshore", on stretcher frame

Alexander Koester's specialisation in the theme of ducks makes him one of the greatest animal painters in the history of art. In a late Impressionist manner, he virtuously reproduced reflecting water surfaces and duck plumage shimmering in light and shadow. This made him successful. In 1904, Koester was awarded a gold medal at the World's Fair in St. Louis, and he received another gold medal from Prince Regent Luitpold of Bavaria. Starting in 1908, the artist regularly visited Lake Constance to paint large expanses of water in all kinds of weather. Today, Koester's paintings are sought after by collectors from all over the world and constantly achieve new record sums at auctions.

An attitude that spread from literature and philosophy into the visual arts, established in about 1800 but failed to produce its own style in visual arts.

The art of Romanticism was determined by the content of the awareness of life and the sensations triggered by it. Inwardness and feelings, dream and fantasy, world and nature, the power of mythical and the striving towards infinity became central themes. The actual realm of Romanticism lies in painting and drawing. Landscape, in particular, came to the fore as a recurring theme: man and nature were set in relation to each other and moods were reflected. Alongside the new feeling for nature, there was a renewal of religious attitudes and a return to the past, tradition, history, old legends, fairy tales, as well as to the art of old masters and epochs. Especially in the case of Germany, this was strongly national-oriented art.

Main representatives in Germany include C.D. Friedrich, P.O. Runge, J.A. Koch, M. v. Schwind, and also the Nazarene group of artists. French Romanticism, which was characterised by other trends than the German, is represented mainly by the art of Delacroix.

Romanticism lasted until around 1830.

Inroom view
Choose Your Cookie Settings
We use cookies and similar technologies provided by various services to provide you with a better and safer user experience. Some services are necessary for the website to function, whilst others are used to analyse and improve the user experience and are used by us and other approved third-party partners to tailor relevant advertisements for you.
By clicking Accept All Cookies, you give us your consent to use all services that require your consent. You can decline services that are not required by clicking Decline Cookies. You can change your preferences at any time under .
Currency calculator
Price in EUR
€258.00
Exchange rate:
Stand:
The service is currently unavailable.