Andora was born in East Berlin in 1957. In 1976, he was sentenced to one year in prison for "disobedience" to the GDR Homeland. After his release, he worked as a gravedigger, stoker, sacristan, lift attendant... and again failed in the system. In 1980, he was imprisoned again and deported. Andora came to West Germany and, after finishing his studies, he "immediately gave up trying to become a full member of society..."

His actual creative era began in 1985. His first paintings in a neo-expressive style, testify the beginning of a search for his very own style. Finally, he developed an independent pictorial language and expanded his chosen means of artistic expression. Soon solo exhibitions and participation in exhibitions in Germany, other European countries and the USA followed. At the same time, the spectacular "Projects for the Preservation of Contemporary Art in Everyday Life" started, with which Andora achieved the resonance of a large audience. These projects were developed in close collaboration with the industry, but artistic freedom always remained paramount.

He created "the fastest work of art in the world" with a hand-painted Formula 1 racing car, designed the boxing robe for the famous german boxer Henry Maske, painted a Russian Proton rocket that made art history in space. For the Expo in Hanover in 2000, he designed a giant horse from Lower Saxony based on the coat of arms of the state.

Today, Andora lives and works in Berlin. Most of his works are exhibited in European and American collections. The long-standing collaboration with his artist colleague Della, born in Hanover, Germany in 1956, became official at the beginning of 1999 under the name "Studio 4". 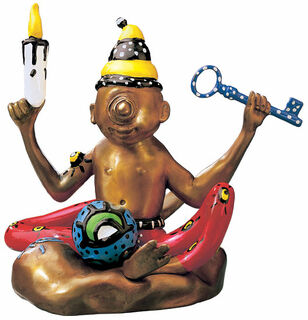 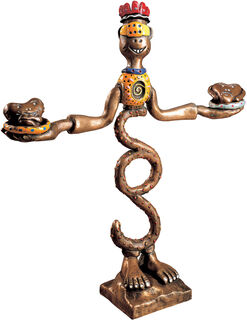