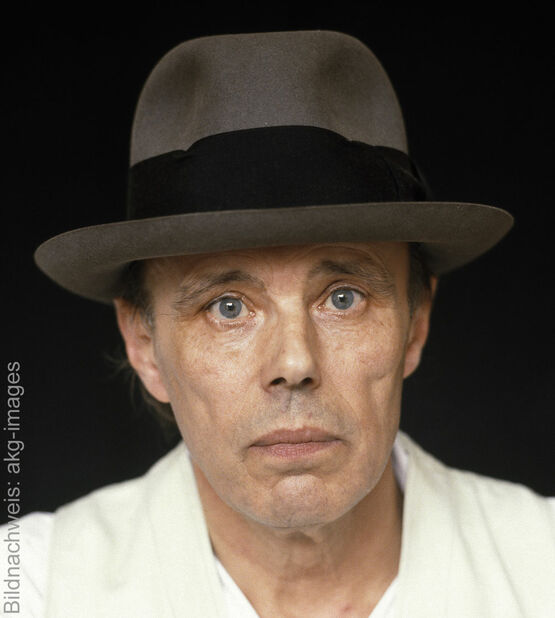 Sculptor, draughtsman, painter, performance artist and art theorist - Joseph Beuys is undoubtedly one of the most important artists of the 20th century. Already during his lifetime, he became a legend with his hat and aviator vest and was a trailblazer for today's contemporary art.

Usually, the viewers stand like a dying duck in a thunderstorm in front of his works. And this metaphor actually fits quite well. Animals appear repeatedly in the art star's self-developed mythology, for example in the environmental art "Lightning with Stag in Its Glare", which is permanently installed in the Museum für Moderne Kunst (Museum of Modern Art) in Frankfurt, Germany. The monumental installation consists of 39 metal casts of clay models that are arranged in a room that has been specially designed for the piece. The work compromises dark heaps of clay, symbolising amorphous primordial animals, in front of a six-metre-high triangular form cast in bronze, which thins out towards the top and symbolises lightning. The depiction of a stag, cast from an old iron cart and resting on "wooden legs", stands out with its silvery matt surface. A story of Creation?

Beuys commented that the stag was a component of nature for the ordinary consciousness and raised the following question: "But how does nature now react if every future nature will be a man-made nature?" It is the 80s, Beuys' visionary reflections go far beyond the boundaries of the art world. With the motif of the stag, which also appears very frequently in his drawings, the artist opens up a whole world of possible interpretations. He also establishes art-historical references, for example to German genre painting and such nature scenes that usually show the stag roaring majestically in front of a lush green forest, a popular motif in German living rooms that has so little to do with the idea of art that Beuys conveyed. It is difficult if not impossible, and certainly unintentional, to fully understand the artist's sensually enigmatic works.

With Beuys‘ art, it is about feeling something. As is always the case with art. 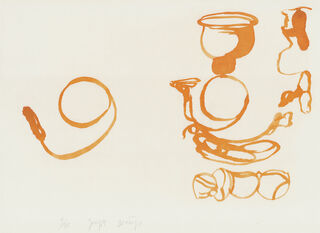 Joseph Beuys Picture "From the Life of the Bee" (1978), unframed