In order to distinguish the Brueghels family, they were given epithets characterising their work. Thus Jan Brueghel the Elder became the "Velvet" or "Flower" Brueghel. Indeed, his flower bouquets are among the most beautiful in Dutch painting. He composed an illusionistic flower paradise in a knowledgeable, exact reproduction of the flower shapes and colours of all seasons. Thanks to his training as a miniature painter, he was able to achieve this magnificent attention to detail.

Jan Brueghel was born in Brussels in 1568 as the second son of Pieter Brueggel the Elder. After his apprenticeship with the painter Coninxloo he went to Italy and was admitted to the Antwerp Guild of St Luke in 1597. Here he became friends with Peter Paul Rubens. The high point of his career, however, was his employment as court painter to Archduke Albrecht of Austria.

Although Jan Brueghel took up his father's themes, such as landscape depictions or rural scenes, he never achieved his father's moralising effect. His skill lay in his use of colour: he achieved the velvety lighting effects of a relatively uniform colour palette through deliberately placed contrasts of light and dark, while the sumptuous floral still lifes are beguiling in their clear composition and colours.

Jan Brueghel the Elder, who had become a highly respected painter in Antwerp, died on 12 January 1625 from cholera. 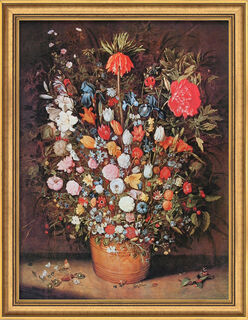 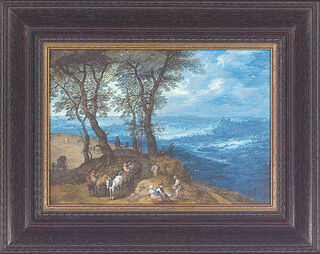 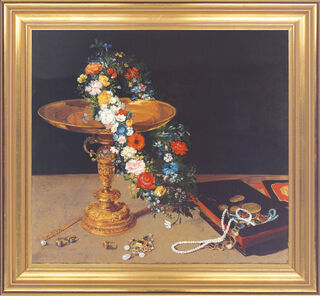