Gustav Eberlein was a sculptor, painter and writer. The German Emperor Kaiser Wilhelm visited him frequently in his studio close to Berlin's Lützowufer. Martin Gropius was one of his patrons. At the end of the 19th century, there was no one among the great and powerful who did not want to be portrayed by him. And so the fame of Gustav Eberlein, who was born near Hannoversch Münden, Germany, was based mainly on the many monuments of prominent people he produced. His enormous oeuvre, consisting of over 600 sculptures and 300 paintings, also made Eberlein one of the most prolific artists of his time. 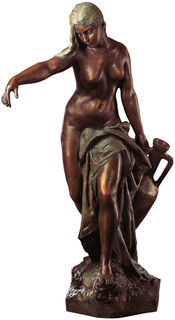