Jörg Immendorff, born in Bleckede, Germany, is one of the most important contemporary German artists with worldwide recognition.

In the 1970s he developed an emphatically object-related visual language with symbolic, art-historical and political allusions. "Every picture by Immendorff is a critical representation of a cultural-political situation," writes Lorand Hegyi about the artist. His pictures are today exhibited in the world’s most important museums.

Through his friendship with the painter A.R. Penck, who was still living in East Germany in 1976, the painter and sculptor Jörg Immendorff developed a history painting that reflects and critically examines the theme of German division. This year he began the series of sixteen large-format paintings "Café Deutschland". In this series, his striking and stylistically pluralistic painting style found expression in an inspiring way.

Immendorff's political ambitions already emerged during his training at the Düsseldorf Academy. One of his teachers was Josef Beuys, with whom he worked closely.

Immendorff founded the LIDL Academy and used LIDL as a pseudonym, which represented politically oriented art. He understood his politically engaged paintings as art that served the nation and the working people. He is the utopian among painters: "I am the only painter in the history of art who worked on a utopia that then became concrete" (German Reunification).

His sculptural style is characterised by an expressiveness comparable to that of the artists' community "Die Brücke". And again through his sculptures historical and social issues are forcefully traced.

His paintings and sculptures are presented to the interested art public in extensive exhibitions of important museums. 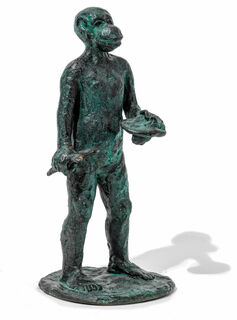