Along with Andy Warhol, Robert Rauschenberg and Roy Lichtenstein, Tom Wesselmann played a significant role in shaping the art history of the 20th century as one of the outstanding representatives of Pop Art.

Wesselmann's subject matter targets a central area of modern society: the world of the cult of sex and stardom, strikingly displayed through advertising and visual media. His works make creative use of the methods of advertising and illustrated magazines and draw attention to them.

In his first nudes, Wesselmann's future wife, Claire, posed as his model. But, from the early 1980s onwards, it was Monica Serra, whom he had met at the opening of one of his exhibitions and who also became his assistant. Wesselmann's works from this period are comparable to the tradition of classical nude painting from Titian to Manet to Matisse and Picasso, which he quotes in some of his works.

Today, Tom Wesselmann is among the classics of modern art, whose independent style is characterised by the aesthetics of abstract expressionism within the motif framework of a striking pop theme. 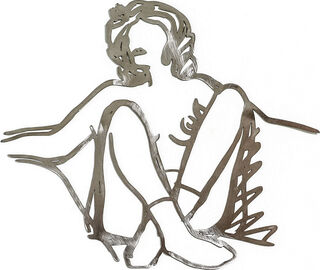