Akte One (born in 1978, Berlin) and his crew TLB have been one of the leading graffiti artists in the street art metropolis of Berlin since the early 1990s. At the same time, he began to devote himself to creating works on canvas. His works are still strongly characterised by typography. Akte One transfers the stylistic characteristics of graffiti from the street onto the canvas in an abstracted way. Through the combination of the intensive editing of the image carrier and the expressive-gestural application of paint with the meticulously executed marker drawings, the artist creates multi-layered pictorial worlds that do not conceal their origins. The fact that humour plays an important role for Akte One is shown by the comic characters who appear regularly in his work.

In the "Innaframes" series, he experiments with a framed image within the image and combines typographic elements with figurative depictions in the style of Pop Art.

Akte One is not only a painter and visual artist but also a successful musician. His work combines a broad spectrum of hip-hop culture. His works on canvas are thus part of an entire oeuvre with which the artist constantly carries this culture forward. 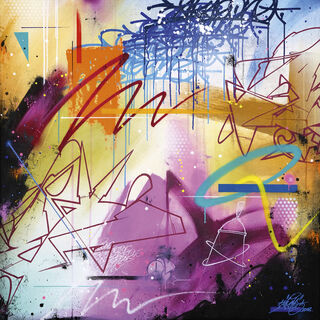