Georges Braque, the revolutionary of modernism and classic of French art, left behind a magnificent oeuvre of prints: around 300 etchings, copperplate engravings, lithographs and book illustrations. His life's work bears witness not only to an extraordinary joy in experimentation but also to a highly idiosyncratic pictorial imagination and creative power.

Braque stated the following essential observation: "We must be content with discovery and renounce explaining. In art, only what cannot be explained matters, nothing else. A work that does not have a magical effect is not a work of art."

Before the First World War, Cubism emerged in 1908 in France, whose founding fathers were Georges Braque, who was born in Argenteuil, Val-d'Oise on 13 May 1882, and his friend and companion Pablo Picasso. Returning from the war, however, Braque pursued different artistic paths from Picasso, which in turn linked him to Henri Laurens and Juan Gris.

The guitar, vases and tables were central motifs in the Cubist paintings. The pure colours that still dominated his early Fauvist landscape paintings subside to a grey-brown colour palette. As an antithesis to Cubism, Braque developed the collages, which created a new pictorial reality with scraps of wallpaper and newspaper cuttings. This was followed by landscapes again in the 1930s, which, however, bear witness to a still-life-like structure. From 1938 onwards, the traditional theme of the studio became important to the artist, to which he added a mystical component through the bird motif.

In the last years of his life, the artist presented himself not only as a painter and sculptor but also as a jewellery designer. His "Bijou Braque" combine the art of jewellery with the aspiration of the artist. He used Greek motifs in over 100 designs. A dozen of them were even purchased by France. His art was so highly regarded that he was the first artist to have an exhibition dedicated to him in the Louvre in 1961, while he was still alive. When Braque died in Paris on 31 August 1963, the French Minister of Culture, André Malraux, made his status clear once again: "He is at home in the Louvre with the same right as the Angel of Reims in his cathedral."

The overlaps and saturations in Braque's works do not appear intensely spatial but are an integral part of the picture plane. This is why his paintings appear aesthetic and sensitive. His works "activate" the sense of seeing and the pictorial impression is always ambiguous. The motifs are dissolved into colourful and formal structures. The form has autonomy and at the same time is integrated into larger constellations. All major museums exhibit his work in prominent positions. 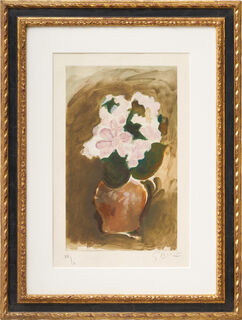 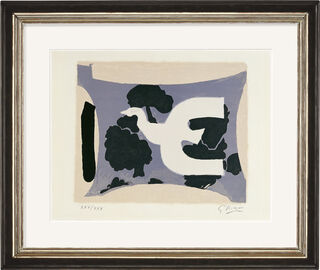