The works of Tilman Riemenschneider represent the transition from the Middle Ages to the Renaissance like hardly any other sculptor. With his outstanding genius craftsmanship, he breathed new life into the old traditions. He was the first artist to frequently dispense with painting his works and discovered the play of light and shadow as a creative element. In this way, he created magnificent compositions full of emotional tension, in which he brought his figures to life with expressive faces, accentuated gestures and dramatic drapery.

The carver and sculptor Tilman Riemenschneider was born around 1460 in the Harz region in Germany and died in 1531 in Würzburg. Through his wanderings, he was able to visit Swabia and the Upper Rhine. He finally settled in Würzburg, where he achieved such renown that he was elected mayor.

Riemenschneider's works tie in with Swabian and Upper Rhine art in the tradition of Gerhaert van Leyden. However, the depictions also show that he must have been familiar with the prints of his contemporaries Martin Schongauer and Albrecht Dürer. Riemenschneider progressed from a two-dimensional interweaving of forms to ever greater spatiality. His multi-figure compositions became structured.

His preferred materials were lime wood and Franconian sandstone, but also marble and alabaster.

Riemenschneider became famous for his altars. His best known is the Altar of Maria in Creglingen. Riemenschneider was an innovator primarily in carved altars: he was one of the first sculptors to dispense with coloured painting. His figures differ from the contemporary late Gothic in their lyrical tenderness and inwardness. 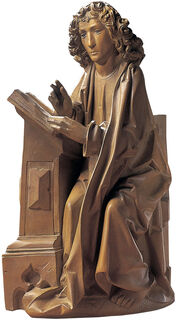 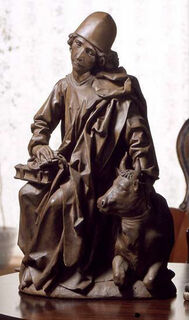 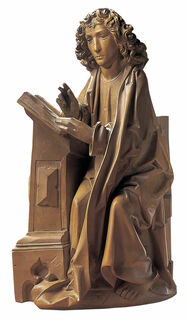 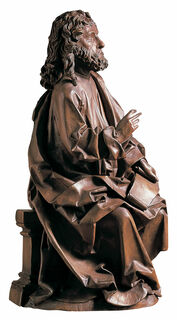