Show all categories Cubism Back

Cubism is an art style based on geometric shapes such as rectangles, circles, or cylinders. The painters Pablo Picasso and Georges Braque played a decisive role in the development at the beginning of the 20th century. Cubism is one of the great innovations in painting and influenced many other styles, such as expressionism and abstraction. 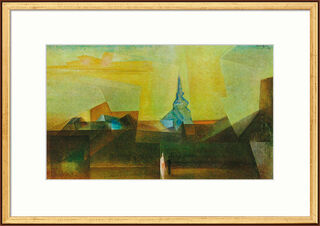 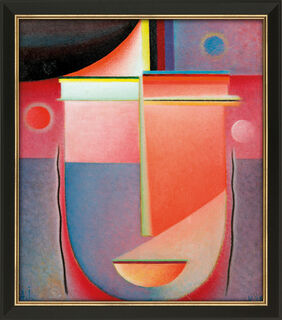 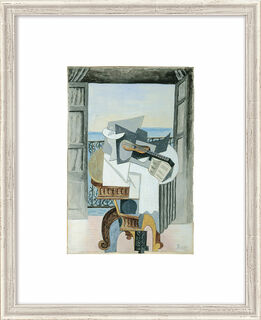 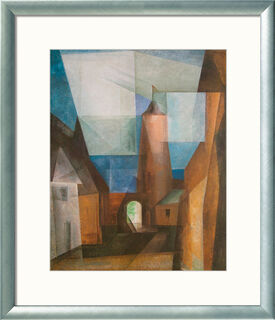 Lyonel Feininger Picture "The Towert Grützturm in Treptow by the River Rega" (1928), framed 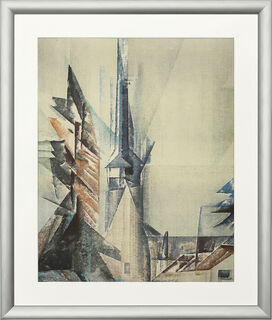 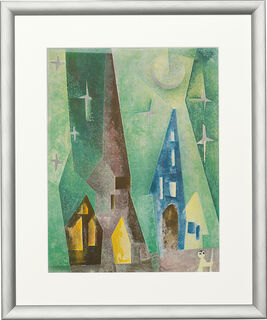 Cubism - A Modern Imagery of the Early 20th Century

Rectangles, spheres, cones, cylinders, and triangles - according to the Cubist perspective, this is all that are needed to create motifs on canvas. This epoch brought ground-breaking innovations to painting at the beginning of the 20th century and set the course for Classical Modernism and abstraction. Cubist artists had rigorously broken with the conventions for pictorial composition and form that prevailed at the time. Instead of attempting to depict objects realistically, pioneers such as Pablo Picasso and Georges Braque reduced their expressive language essentially to geometric objects, from which they could compose all motifs from landscapes to portraits to still lifes. In addition to Picasso and Braque, important Cubist artists include Juan Gris, Robert Delaunay, and Lyonel Feininger. Even after the end of the peak phase of Cubism at the end of the 1910s, this style had a decisive influence on many of the following art epochs such as Expressionism, Dadaism and Futurism, and later Surrealism and Pop Art. Many varieties of abstract painting are inspired by Cubism at their core. The influence of Cubism painting can be traced right up to current contemporary art. You can buy works of Cubism painting at ars mundi.

The Origins of Cubism Painting

The origins and development of Cubism painting are closely linked to the artistic biographies of Pablo Picasso and Georges Braque. Both were searching for new forms of expression in painting at the beginning of the 20th century. They considered the traditional painting style of their contemporaries with a clearly defined foreground, background, central perspective, and the postulate of a spatially and plastically correct representation to be too constraining. The two Cubist artists drew inspiration for their new painting style from various trends in the painting of their time. Picasso was inspired by Paul Gauguin and Henri Rousseau, among others, as well as by African art. Meanwhile, Georges Braque was inspired by the works of Henri Matisse and the art of Fauvism. However, many important impulses originated from an Impressionist: Paul Cézanne. By the end of the 19th century, he had already dissociated himself from academic art and was experimenting with new colour spaces and perspectives. His principle that all forms of nature can ultimately be traced back to geometry became a manifesto for Cubist artists. Inspired by such progressive art ideas, Picasso and Braque initially developed the foundations for Cubism independently of each other and later together for many years. The work "Les Demoiselles d'Avignon", presented by Picasso in 1907, is considered a milestone for this style. This painting already showed some central Cubist characteristics. Picasso defined the bodies of the five women with many right angles, angular shapes, and geometric surfaces. He used few and subdued colours and neglected any depth of space. With this masterpiece, Picasso had virtually given the official kick-off to Cubism painting.

Cubism developed in two major phases, each with its own emphasis and characteristics so that today's art history distinguishes between Analytical Cubism and Synthetic Cubism. After Picasso and Braque had laid the foundations with their ideas, Analytical Cubism first began to take shape. The Cubist artists basically painted figuratively, however, they depicted their motifs with the help of geometric shapes such as rectangles, triangles, circles, cylinders, or rhombuses. Cubist paintings were no longer divided into background and foreground, instead, the pictorial elements were juxtaposed on the same level. The Cubist artists abandoned the central perspective, opting for an all-view perspective, i.e., they depicted the pictorial objects from several perspectives at the same time. In addition, colour became less important, and the Cubists used only a small and rather pale palette of colours.

In the second stage, Synthetic Cubism, the multi-view of the objects remained, but the artists moved even further away from the objects. Instead of reproducing real objects with geometric bodies, the Cubists now constructed new pictorial objects with their visual language. In addition, the artists again placed more emphasis on colours and painted with stronger tones in a greater variety. The principle of composition and the regained colourfulness also found their counterpart in the technique of collage, which was also developing at this time. Some Cubist artists began to apply other materials such as newspaper cuttings, textiles, wood, glass, or sand to the canvas in addition to paint and used these set pieces to create their pictorial objects. Some stylistic features from both phases of Cubism were later found in the Expressionists of "Brücke" and "Blauer Reiter", the Constructivists and various forms of abstraction. You can buy paintings from these important epochs at ars mundi.